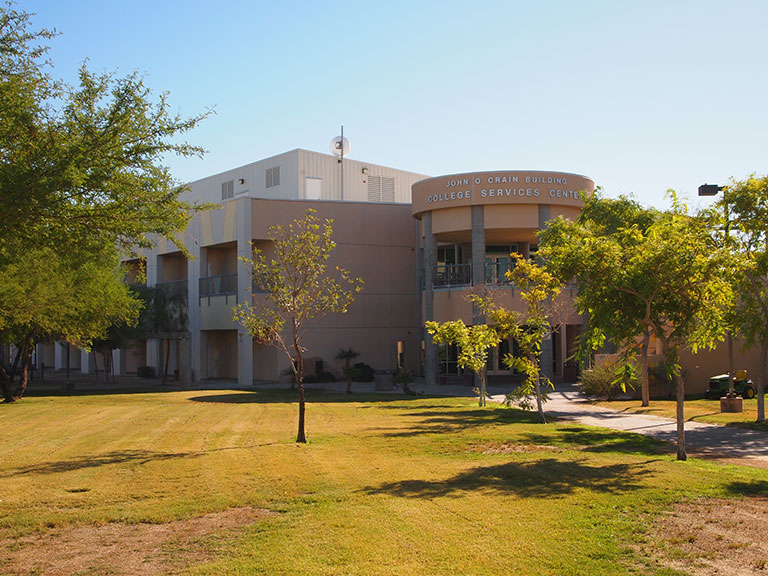 Palo Verde College, located on the banks of the Colorado River in the agriculturally fertile Palo Verde Valley of southeastern California, opened its doors in 1947 to just 17 students. Over the years the college grew, and in 2001 moved to its new 200 acre campus on the mesa overlooking the city of Blythe, California.

Palo Verde College supports an exemplary learning environment with high quality educational programs and services, and is currently the college of choice for thousands of students of all ages and backgrounds. Students attend classes from early morning to late evening and weekends taking advantage of a wide variety of courses including career and technical, transfer, developmental, and continuing education.

In 1999 Palo Verde Community College District expanded to include the eastern part of San Bernardino County and the City of Needles. The Palo Verde College Needles Center occupies the historic Claypool Building which was renovated over a five year period and restored to its classic architectural features inside and out. The newly renovated Needles Center opened its doors on June 18, 2009 and is now home to a 21st century learning environment outfitted with cutting edge technology throughout.

Whether you are interested in going to class on campus, distance learning, or even interactive iTV education, Palo Verde College has the types of study that will fit your busy lifestyle. The college offers a wide variety of certificate programs, associate degrees, and transfer programs for those interested in transferring to a four-year university after completing their first two years of education at PVC, or for those who aspire to get a good paying job after leaving college.

Our academic programs and services are designed to promote student success and lifelong learning for a diverse community of learners. Palo Verde College is committed to excellence, and to your success in whatever educational path you choose.